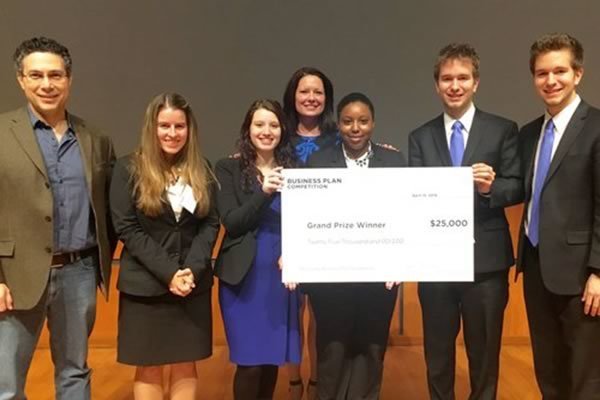 A new cancer fighting technology developed by Basar Bilgicer and Tanyel Kiziltepe, two professors with deep ties to the University of Notre Dame’s Advanced Diagnostics & Therapeutics (AD&T) initiative, is making a rapid and exciting transition to a real-world, commercialized product—one that could increase the effectiveness of cancer medications while lessening their toxic effects and improving patients’ quality of life.

The Precision Medicine technology is centered on ligand-targeted liposomes (LTLs), tiny bubble-like particles made from a phospholipid bilayer—the same molecules that comprise cell membranes. Using a new technique developed my Bilgicer, Kiziltepe, and others, the liposomes made by the team are much more consistent compared to the industry standard. This innovative format allows the components to be carefully incorporated during liposome synthesis and, in turn, drastically increases uniformity, which has been a major obstacle to the use of LTLs in personalized healthcare.

Speaking about the research, Bilgicer explained, “Liposomal nanoparticles work by penetrating the gaps that the vasculature around the tumor tissue has, delivering cancer medication selectively to the cancer cells, and leaving healthy tissue unharmed.”

“In addition to this selective delivery to a tumor, liposomal nanoparticles also include targeting molecules and stealth coating in their design for more efficient tumor targeting, while staying undetectable to the body’s natural defense mechanism, the immune system.”

“The ability to control the design and fabrication of LTLs to this degree opens up new possibilities for the targeted delivery of chemotherapeutics,” added Kiziltepe, who has served as a research assistant professor in AD&T for the past seven years. “It could be especially attractive to pharmaceutical companies who want to create nanoparticle formulations of struggling or patent-expiring drugs.”

The new approach has been licensed by Omaha-based start-up company Certus Therapeutics and is being marketed as a nanoparticle drug delivery platform known as Lypos. As validation of the technology’s commercial potential, Certus recently won the grand prize at Notre Dame’s 2016 McCloskey Business Plan Competition.

Both Bilgicer and Kiziltepe are natives of Turkey who came to AD&T and Notre Dame’s Department of Chemical and Biomolecular Engineering via Harvard and MIT, respectively.

“Basar and Tanyel have been with us almost from the beginning,” says Paul Bohn, AD&T’s director, “and have contributed significantly the university’s biomedical research community. We’re thrilled about where this current work is going and the benefit it could have for patients around the world.”

Originally published by Arnie Phifer at advanceddiagnostics.nd.edu on May 19, 2016.